Get fresh music recommendations delivered to your inbox every Friday.
We've updated our Terms of Use. You can review the changes here.

from Love and Monsters by Sockpuppet 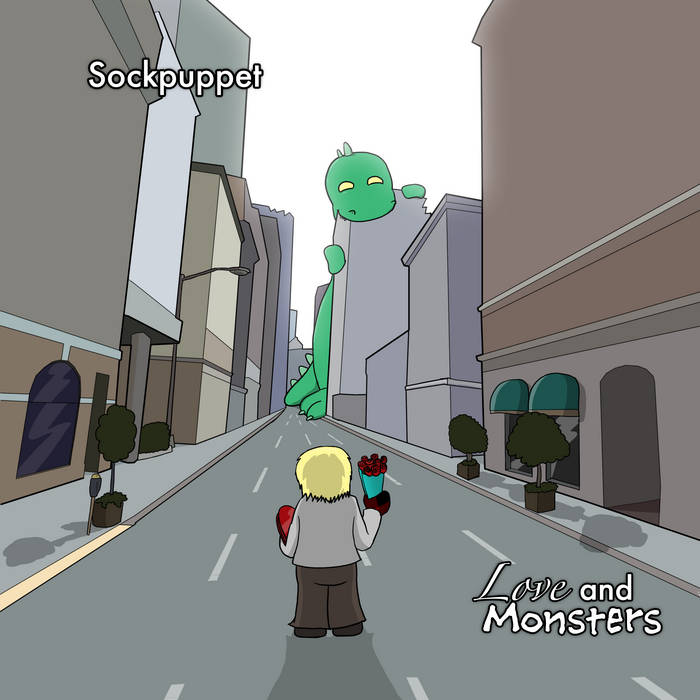 So, there's this pretty weird thing that happened to me recently. I was walking down the street, and this guy came up to me... he was wearing a blanket like a cloak, like he was some sort of wizard or something, but he smelled like pee and feces. I mean, that's not the weird thing, that happens pretty much every day. But anyway he stepped in front of me and said, "Hey, you want a moscow?" I told him no and tried to keep going, but he kept on stepping in front of me, and he was all, "Come on, this moscow, it's great." And I noticed that he was holding this thing in his hands which looked like a clay cow, that was covered in, you know, that fuzzy plant, that looks like moss but isn't. You know, that cheap sort of gift you get at the drug store for that person who you really want to make them aware that you like them but not enough to give a crap about what sort of gift you get them, right? Anyway, so this guy is trying to get me to take the terra-cotta cow and I just want to get home and he's just saying, "Come on, man, take it. I gotta get rid of it, but I don't wanna just throw it out," and I said, "Fine," and I took it, and then he just said, "Thanks!" and ran off really fast.

But that's not really the weird part. So, I took this stupid thing home, and figured it would go okay next to my herb garden on my balcony, and so I thought I put it there, but when I went into the kitchen to fill up my watering can, the moscow was sitting next to the sink. Pretty weird, right? Anyway, I just watered it right there, and now... yeah, this is the really, really weird part. It actually turned its head at me – yeah, I know, right? – and it said "Idaho!"

Now of course this was really weird. I mean, not only was this little tchotchke talking, but you'd think that if a cow were to talk it'd say something like, "Moo." I dunno, "Milk me." Something like that. Right? But "Idaho?" So I asked, "Idaho?" And it said, "No, Idaho."

So my friend was kind of weirded out too and she asked, "Idaho?" And then the moscow said, "No, Idaho. Youdaslut."